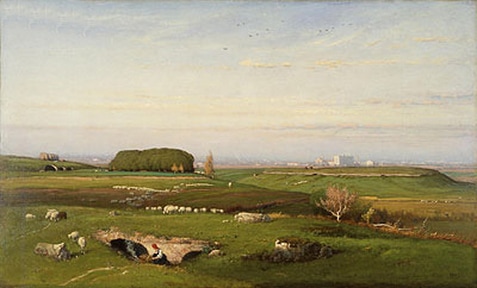 Students will examine the works of George Inness and Albert Bierstadt, and how the Roman countryside influenced their view of the American landscape.

Students will focus on the material processes of Inness and Bierstadt and how their depiction of the Italian landscape coincided with their vision of America.

From the renaissance to the first half of the eighteenth century, landscape painting was considered the least important subject matter for artists and their patrons, unless it was integrated into “historical painting,” or themes related to religion, and Greek literature. Sir Joshua Reynolds, the first elected president of the Royal Academy, London, stated in his Discourses that landscape ranked below history painting, a view that was also embraced by American painters. This view was premised on the notion that history painting elevated the landscape to a more exalted level:

“If we suppose a view of nature represented with all the truth of the camera obscura, and the same scene represented by a great artist, how little and mean will the one appear in comparison of the other, where no superiority is supposed from the choice of the subject. The scene shall be the same, the difference only will be the manner in which it is presented to the eye. With what additional superiority then will the same Artist appear when he has the power of selecting his materials, as well as elevating his style? Like Nicholas Pousin, he transports us to the environs of ancient Rome, with all the objects which a literary education makes so precious and interesting to man: or, like Sebastian Bourdon, he leads us to the dark antiquity of the Pyramids of Egypt; or, like Claude Lorrain, he conducts us to the tranquility of Arcadian scenes and fairy land.”
(Sir Joshua Reynolds, Discourses, Penguin Classics, N.Y., 1992).

The American Revolution produced a demand for portrait paintings, which helped reify the status of the merchant class. By the beginning of the nineteenth century, landscape painting increased in popularity. In America, westward expansion exemplified by the expeditions of Lewis and Clark (1803) made the “virgin,” “uncharted” areas of the American landscape the ideal symbol of manifest destiny. Panoramic views of the American landscape offered a sublime vision of America’s future. While the early formation of the nation appeared to develop from a pure, unadulterated present, America relied on the past for inspiration. Like the British and Spanish empires, America envisioned its destiny beyond the Pillars of Hercules;* the antecedent forms of a European past became the inspiration for the American present and future.

*The “Pillar of Hercules” is the mythological name for the boundaries of the Strait of Gibraltar, which separates the Mediterranean Sea from the Atlantic Ocean. The term has been used to describe the Roman Empire, as well as future nations engaged in empire building.

For Thomas Cole, founder of the Hudson River School, Rome provided the historical foundation for a nation still in the process of making history.

He who stands on Mont Albano and looks down on ancient Rome, has his mind peopled with the gigantic associations of the storied past; but he who stands on the mounds of the West, the most veritable remains of American antiquity, may experience the emotion of the sublime, but it is the sublimity of a shoreless ocean un-islanded by the recorded deeds of man(Barbara Novak, Nature and Culture, p. 207).

Although Italy had become a terrain of foreign interventions, the ruins and architectural remains continued to inspire modern nations and their painters. Yet for American painters, the interest in the Roman countryside remained an ambiguous one. The cultivated antiquity of the Roman countryside contrasted with the wildness of the American landscape. Why did American landscape painters travel to Rome during the 19th century? What fascinated them about the Roman Campagna, the surrounding countryside of Rome? How similar and/or different was Rome from their vision of America?
IV. Missouri’s Framework for Curriculum Development in Fine Arts

History
What all students should know

Criticism/Analysis
What all students should know

Know the vocabularies and concepts associated with various types of visual art works. (FA 2)
Know processes for evaluating final products in terms of media, methods, and choices. (FA 2)
Know how to communicate in various visual, oral, and written formats. (FA 2)
Know about career opportunities in the visual arts. (FA 2)

Aesthetics
What all students should know

George Inness
George Inness was best known for his non-topographical paintings that replaced descriptive detail, reminiscent of the Hudson River School, with a spiritual use of light. Inness was born in 1825 and grew up in Newark, N.J. and New York. He was the son of a grocer and it was assumed that he would follow in his father’s footsteps. Inness, however, took a different path in life, deciding very early on to become an artist. He received his earliest artistic training from a local painter named John Jesse Barker and served a two-year apprenticeship as an engraver with the firm of Sherman and Smith. Inness’s first exposure to European art occurred during the instruction he received from Regis Gignoux. Gignoux did not influence the development of Inness’s style, but he did introduce him to European masters, most notably, the landscape paintings of Claude Lorrain. Lorrain was a French artist who spent most of his life in Rome and who often painted landscapes of the Roman Campagna. Inness’s early exposure to European painting prompted him to make his first visit to Italy in 1851-2. The painting In the Roman Campagna, 1873, painted during Inness’s subsequent visit to Europe, recalls Lorrain’s View of Rome, 1632, both in terms of composition and subject matter. Also evident in Inness’s work of this period are the influences of the French Barbizon School (see Jean Baptiste Camille Corot, La Cervara, the Roman Campagna, 1830-31, and the religious writings of Emanuel Swedenborg.

[In the Roman Campagna], like The Monk [1873], which he painted the same year, is one Inness’s most formally sophisticated paintings. It is properly scenic – depicting a famous place, the Campagna, and a prominent architectural monument, the Lateran – and suitably colorful – joining in the foreground, as an instance of the mingling of the past and the present that Americans found a specifically meaningful part of their experience in Italy, a shepherdess and a remnant of ancient architecture. And it creates a convincing illusion of spatial depth and luminously atmospheric distance. But it is the complex interplay of form – the tensions and balances, repetitions and contrasts, of shape and color, occurring as an intricately varied design on the painting’s surface – that makes the painting most impressively beautiful.

Inness painted this subject several times. The title of one version, Sacred Grove near Rome, points to another of its scenic attributes and also, perhaps, to an aspect of the painting’s meaning. For the juxtaposition in precise compositional balance of the sacred grove at the left and the Lateran on the right, and the contrast of pagan and Christian (natural and sacerdotal) religion that it makes, have intimations of ironic commentary.

Albert Bierstadt reached a turning point in his career when he obtained permission to travel westward with Frederick W. Lander on an expedition to the Rocky Mountains. He became famous for his large-scale paintings of the region, which were considered the North American equivalent of Frederick Church’s landscapes of South America. Bierstadt was born January 7, 1830 in Solingen, Germany and spent the early years of his life in New Bedford, Massacussetts. He did not study with New Bedford artists but began as a cake decorator, and later as a picture framer. His emergence as a fine artist occurred at the age of twenty when he became a teacher specializing in monochromatic painting. Bierstadt’s first return to Europe occurred in 1853 when he traveled to Dusseldorf, Germany where he hoped to study with a distant relative by the name of Johann Peter Hasenclever, who died shortly after his arrival. From 1853-56, Bierstadt studied under Leutze at Dusseldorf, and in 1856 left Switzerland with Whitteredge and W.H. Haseltine for Italy. During this time, Bierstadt sketched in the nearby Campagna, and painted Olevano in the Sabine Hills about thirty miles east of Rome. Bierstadt continued to make trips to Europe, but his most important works were developed in the states during his expeditions to the Rocky Mountains and Yosemite Valley where he developed sketches for his renowned large-scale paintings.

In the spring of 1857, when he likely made this large sketch, Bierstadt was frequently in the Alban Hills in the company of fellow painters Sanford Gifford, Worthington Whitteridge, and Peter Frederick Rothermel. Olevano Romano, nestled in the Sabine Hills about thirty miles east of Rome, is a quintessential medieval Italian hill town, built on a fortified rock and filled with tortuous, narrow streets and steep-sided houses. The rolling countryside between it and Subiaco to the north has long been known as the area that inspired Poussin and Claude Lorrain. Olevano was “rediscovered” by in 1804 by Tyrolese painter and longtime Roman resident Joseph Anton Koch, who soon introduced the area to his artist-friends, including Washington Allston. In the decades that followed it became a favorite retreat for German painters. Its visitors ranged from Nazerenes, such as Ferdinand Olivier and Schnorr von Carolsfeld in the 1820s, to painters from Düsseldorf, such as Johann Wilhelm Schirmer, toward mid-century. By the 1850s it had become a familiar destination for touristic strolls and Sunday carriage rides, so it was only natural that Bierstadt and his friends soon made their way there. Artists were attracted to Olevano by its architecture, or the olives and grapes farmed there, or the chalk cliffs in the area. Bierstadt’s rendition, one of his largest and most elaborate oil sketches, focuses on the hill town itself. It is a “composition study” of the type commonly made in Düsseldorf, with tack holes in the corners and reference points inscribed along the bottom. Although reworked in places, it has the freshness and precision of a view made in close reference to the site.